Let me tell you how I met Claire C. Riley. It was March of this year, and I had just sent out Savage ARCs. It had taken me so long to write, I was sending out beta copies at the same time I was sending out reviewer copies. I don’t ordinarily do that, but I felt so strongly about the story that I was sure anything my beta readers found would be minor and not enough to detract from the story as far as reviewers went. Well, lo and behold, one of my beta readers (a woman who is a voracious reader and a hell of a beta reader) messaged me shortly after she started (mind you, the folks running my blog tour had literally just sent out ARCs!) and told me to put on the brakes, that there was another zombie story out there with a main character whose name was Nina. Needless to say, it was too late to make the change. Not impossible, mind you, but I knew changing the character’s name at this stage of the game would A) possibly be confusing for readers reading a review about a character named Nina who was no longer named Nina; and/or B) look completely unprofessional for the promo company to email all the bloggers who had just received (and were possibly already reading) the first ARC. It was a hell of a dilemma. I didn’t know Claire at the time, but I have had similar things happen to me (where, as an author, you scratch your head and figure someone ripped you off). Thing is…it does happen, and most times I believe similarities are coincidental. That said, after much debating and gnashing of the teeth and discussing the situation with trusted advisors, I decided to keep the book as is…but I also posted a public disclaimer, in the event that Ms. Riley or her readers came across the book and thought I ripped off her idea.

Trending
Putting my money where my mouth is!

Well, it turns out that one of her readers did read my blog post and pointed Claire in my direction…and Claire was amazingly cool and classy about it. It’s almost as if we were supposed to meet each other! Anyway, since then, I have purchased the first book of her Dead Saga (Odium) and have begun reading it. And I can already tell you it’s a hell of a story that I’m thoroughly enjoying! They are both books with a main character named Nina (a bad ass in both stories, by the way) surrounded by zombies…but I believe the similarities end there. My story is not a traditional zombie story, whereas Claire’s is. You’ve already read about Savage; read on to learn more about Odium and the Dead Saga!

Now, she lives behind the walls.

The barricaded cities, erected by the government to protect the remnants of civilization, have become a brutal dictatorship- causing the inhabitants within to starve, steal and claw for survival. Life behind the walls has become as terrifying as roaming the zombie-ridden landscape beyond.

Citizens trade what they can to gain food, water, and shelter. Nina has only one currency—her body and she is tired of submitting herself to the greedy hands of the self-proclaimed leaders.

An opportunity to escape presents itself in the fate of a young girl named Emily-Rose. For the price of a stale piece of bread, she is set for banishment from the city, and most likely a horrific death at the hands of the deaders. Nina tells herself that it is sympathy and not self-preservation that makes her follow the young girl out of the walled metropolis, and into the overgrown world beyond.

Unused to fighting the deaders, Nina tries to scrounge for her survival and against her better judgment, begins to care for Emily-Rose. However, when you have a bread-stealing liability providing your only back up, survival seems even tougher. Nina is forced to fight for their lives, and with every zombie slain, she becomes fiercer, faster – a grim reaper with her not-so-sharp butcher’s knife.

Along the path to a safe-haven that might not exist, Nina and Emily-Rose meet Mikey who introduces them to a new life they could not imagine, a life above the ground. However, this new world brings new dangers, and darker shadows than she knew.

Nina finds out that the deaders aren’t the only thing to fear beyond the wall.

And that fear will not be ignored, or Forgotten.

“Let’s go.” JD moves off round the corner, and we follow him as one and without argument.

There are stains smeared along the walls, handprints and the words help us written in dried blood. I shudder and look at Duncan. He lowers his gaze away from me and away from the words, knowing only too well that he caused this. He could have saved some of these people if he wouldn’t have been such a coward. Instead he locked them all inside and sentenced them to death.

There are the remains of a body or two on the floor, but not enough of either of them remain to be reanimated, and so JD kicks the bloody bones to the side and out of our way. We can hear more growling coming from behind a closed door; we seemed to have riled them all up, by the sounds of it.

I want to shout out no shit, Sherlock! since there’s a big red cross on the door, but JD turns the handle before I can get my words out. I swallow them down and ready myself as the door opens inwards and reveals to us the five zombies within.

They head straight for us with long, hungry growls, as if mamma didn’t give them their last meal before bedtime. Sludge hangs from their jaws and a cold blankness fills their eyes. Their lips peel back to reveal blackened and broken teeth and they push and shove to get past each other and to their meal. Us. I shiver and swallow down the stomach acid that has worked its way up my esophagus and into my mouth.

“I got this.” Crunch steps forward, and with her two knives, she decapitates the first two zombies with relative ease (if there can be such a thing when killing the living dead). JD follows her in, and when a zombie lunges for him, he deals with it with a quick swoop of his scythe down its middle. From skull to stomach it splits, and everything left inside tumbles into a pile on the floor along with its body.

Crunch laughs as she circles another, kicking it away with her foot until it falls on its back. She stands above it, placing a foot on its chest, and drives her blade through its face slowly and with a maniacal glee that sends shivers down my spine. There is something like contentment in her expression as she pulls the blade back out, gunk spewing out of the hole left by her knife.

The last deader has reached the doorway, and Duncan takes aim with his gun.

“I’m sorry,” he whispers as he pulls the trigger and the zombie hits the floor.

A Little More about Claire!

Claire C. Riley is a bestselling British horror writer whose work is best described as the modernization of classic, old-school horror. She fuses multi-genre elements to develop storylines that pay homage to cult classics while still feeling fresh and cutting edge. She writes characters that are realistic, and kills them without mercy. Claire lives in the United Kingdom with her husband, three daughters, and one scruffy dog. 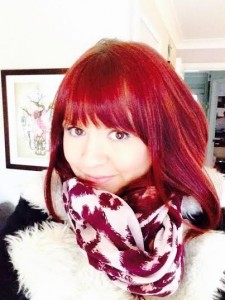 Oh, and if you’re wanting to pick up Claire’s books, you can buy them here:  Claire C. Riley’s Amazon Page