Okay, friends…at this stage of the game, I have to admit something.  I’m still going to be quite secretive about this story.  I’m not ready to leak a lot of details yet.  That said, I do want to share a little bit, just to whet your appetite.  This story will have the feel of Bullet–gritty, raw, realistic…and young.  Even my Street Team admins don’t know a lot, so don’t go threatening them for details. 😉

I had an idea for a teaser, which–thank you to Sarah, my graphics guru–I hope will give you a feel for where the story is going.  And, since we didn’t tell you in the picture teaser, I’m going to tell you now–the main character, Kyle Summers, is female.  I figured I’d better clear that up right now.

So, without further ado, I give you your first glimpse at Vagabonds: 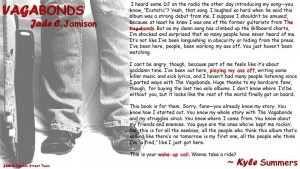 I heard some DJ on the radio the other day introducing my song—you know, “Ecstatic”? Yeah, that song. I laughed so hard when he said this album was a strong debut from me. I suppose I shouldn’t be amused, because at least he knew I was one of the former guitarists from The Vagabonds. But as my damn song has climbed up the Billboard charts, I’m shocked and surprised that so many people have never heard of me. It’s not like I’ve been languishing in obscurity or hiding from the press. I’ve been here, people, been working my ass off. You just haven’t been watching.

I can’t be angry, though, because part of me feels like it’s about goddamn time. I’ve been out here, playing my ass off, writing some killer music and sick lyrics, and I haven’t had many people listening since I parted ways with The Vagabonds. Huge thanks to my hardcore fans, though, for buying the last two solo albums. I don’t know where I’d be without you, but it looks like the rest of the world finally got on board.

This book is for them. Sorry, fans—you already know my story. You know how I started out. You know my whole story with The Vagabonds and my struggles since. You know where I came from. You know about my friends and enemies. You guys are the ones who’ve kept me rockin’. No…this is for all the newbies, all the people who think this album that’s selling like there’s no tomorrow is my first one, all the people who think I’m “a find,” like I just got here.

This is your wake-up call. Wanna take a ride?