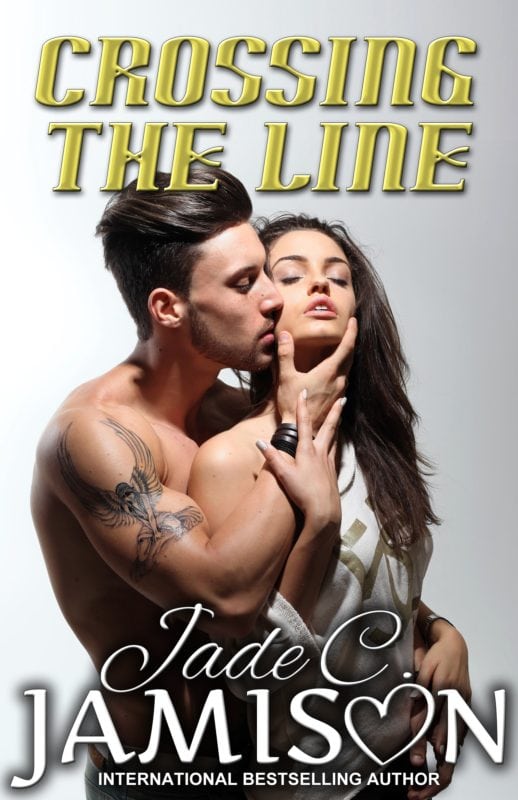 Samantha is Ryan Craig's lawyer, which means she's not allowed to touch him, taste him...

But she just can't keep her hands to herself. And, after a night of unbridled passion, she discovers her troubles are just beginning...

***PLEASE NOTE: This book was formerly published under the title STATING HIS CASE.

FROM THE FIRST EDITION:

In a nutshell: Samantha Paulson, Attorney at Law, finds it hard to concentrate when new client Ryan Craig sits on the other side of her desk. She finds herself immediately drawn to him against her better judgment. She is torn between her career and her feelings for him. If she follows her heart, she could have the night of a lifetime with good-looking, heart-stopping tattooed bad boy Ryan, but she could also end up disbarred. Is he worth it?

How Samantha resembles Jade: I am a certified paralegal, but I can tell you I never want to be a lawyer.

Samantha T. Paulson: A fiercely strong lawyer, she and her friend Adam are partners of their own business. Samantha loves men, particularly tattooed men, but she doesn’t advertise that fact.

Adam Solano: Samantha’s partner, Adam was also once her lover and is now just her best friend.

Ryan Craig: A good-looking, quiet, maybe even shy construction worker, Ryan needs someone to help him find out if he’s a father or not.

Ed O’Malley: A nebbishy but straight-laced attorney with the DA’s office.

Samantha sat in her office nibbling on a muffin and drinking her first cup of office coffee for the morning with a sh*t-eating grin on her face that was hard to suppress. For the first time in weeks, she was on time to work, even with the extracurricular morning activities. Having cooled off a little, she wasn’t so sure that what had happened last night was as right as it had felt a few hours earlier. Ryan Craig’s file folder was situated in the middle of her desk, delivering a guilty verdict upon her. When she wasn’t grinning from ear to ear, she was biting her lip, worrying herself sick. She’d violated one of the Model Rules of Professional Conduct–the written code of ethics for attorneys–and now she could have her license suspended or, worse yet, she could be disbarred. It was in black and white; there was nothing gray about the paragraph covering sexual misconduct. She’d had sex with a client when there had been no prior sexual relationship, and it really didn’t matter that it was consensual. She knew the law; she knew the rules—it was her job. And yet she had willingly and knowingly done it. It had been premeditated.

Sex in the first degree. She almost giggled at the thought.

Obviously, part of her still didn’t regret it in the least.

The problem was that her logical side was at war with her emotional side; the real Samantha was fighting lawyer Samantha. And neither side was winning; they were at a draw.

So here she sat, worrying about the dilemma she’d gotten herself into. She didn’t like to bring outside problems into work, but it just so happened that this wouldn’t be a problem if not for her job. On the other hand, she wouldn’t have met Ryan if she weren’t in this line of business in the first place. And on and on went her circular way of thinking on this fine day.

It didn’t matter that maybe no one else would ever know. She’d done it. She’d violated the attorney / client trust, had used her position to seduce this man…she’d crossed the line, and there was no going back to what had been before. And would this little action just make breaking the next rule that much easier? But the voice of rebel Samantha told her, “Yeah, but you might never have had the chance if you hadn’t done it last night.” So would that have been so bad? She never would have known what she’d missed. She would’ve gotten over it.

So she sat there all morning, tapping on the computer occasionally, taking a phone call now and again, shuffling files and looking at all the work she wasn’t doing…racking up no billable time. Christ. She would have done better if she’d stayed home.

But she needed to be here…she needed to find a way to fix this; the problem was that there was no way to do it. No way out. None.

She was guilty as hell, and she knew it. She could see herself sitting in front of a panel of Bar officers…she’d always pictured them in a big hollow room that overshadowed a large table and a few chairs, judging attorneys on one side of the table with her across the room, sitting alone on a chair in the middle of big empty space. The room would be so large that voices would echo and sound louder than they really were. As she pictured the drama in her mind, she could see herself saying, “Sorry, sirs, but it was an impulse I couldn’t resist. I could just feel the masculinity rippling off him…it was something magnetic that I couldn’t pull myself away from. So, yes, sirs, guilty as charged. I f*cked him. Not once, but several times. And it was the best sex I’ve ever had. And I would do it again. It was him–I’ve never felt that way about anyone else. Honest. Please just slap my wrist, suspend my license for a year so I can play paralegal at the office and continue to help my partner…please don’t disbar me. This job is my life. So I messed up once…”

But what would she really say if she were in that situation? How could she explain what had happened? She didn’t have a clue.

She rubbed her forehead with her hand. She was in a bad way. She didn’t know what to do. If only a real tribunal hearing were as simple as the one in her head.

Sometime before lunch, she heard Adam come through the door, checking with Angela for messages before heading back to his office on the other side of the lobby. She dreaded seeing him now…after their conversation last night, she didn’t know how to handle him. Adam was a great partner, had always been a good friend…she’d let him down too.
But that was the least of her problems…now she wondered if she should tell Adam about last night or leave it be. Did he need to know? Or should she just tell Ryan she’d acted improperly, and they couldn’t be together again, at least not until his case was signed, sealed, and delivered? Her stomach grumbled at her, cursing and judging her.

Almost as though her thoughts were drawing him to her at that moment, Adam tapped on her door and walked in, sitting in the chair across from her desk. “Guess I didn’t need your advice after all…we got a plea bargain this morning. Mrs. Roberts accepted it. The DA knew she didn’t have anything other than circumstantial evidence, so Roberts got a sh*tload of probation, court costs, attorney fees…but no jail time.”

“Yeah…I think the cops found something on her lover, and they’re going to pursue the lead. I think they wanted to get this case out of the way before moving in on that. Sh*t, I don’t know if I want to handle his case…he’s a brother-in-law, for Christ’s sake. Course, he might not even want me.”

So while she sat across from the best lawyer she’d ever known, her partner of ten years, she didn’t know what else to say to the usual run-of-the-mill office stuff. “You’ll take his case if he asks, won’t you?” She felt her stomach churning–she’d been so nervous, her stomach felt like it was eating itself.

Samantha sucked in a deep breath and forced herself to maintain eye contact. “Nothing.”

“Samantha, I know you better than that.” His concerned look turned to a look of surprise and realization. He smiled. “Never mind. I wasn’t even thinking. I forgot.”

“What about last night?”

“C’mon. I’m not stupid. I know you had a date last night, and Ed said he saw you mackin’ on some guy at the bar last night.”

She could feel the blood rushing to her face. “Ed O’Malley?”

“Yeah…he was assigned to the Roberts case. You know he’s got the hots for you. So he was bitching and moaning after we’d settled about how he saw you with some guy last night and wondered if I knew who he was.”

Adam laughed, not knowing why Samantha was so concerned with this new development…he just thought she was upset that Ed was still carrying a torch for her. “Why don’t you just f*ck him once and let him get it out of his system?” She gave him an exasperated look; ordinarily, this kind of banter was typical between them–and fun. “I’m kidding.” Laughing again, he said, “But he might leave you alone then.”

She sighed. She knew now she had to tell him. It would only be a matter of time before he found out. He read the look on her face. “Come on, Samantha. Tell me what’s bothering you.”

He sat up in the chair and leaned forward. “Now you’ve got me worried. Tell me what?”

She sighed again and stood up, walking across the office to her door. She closed it and walked back to her desk. Adam knew then that something was wrong, because Samantha rarely worried if the door was open unless there were clients in the lobby. “What the hell is going on?”

She sat back at her desk and folded her hands in front of her. She looked down, feeling lower than low. So quiet that Adam had to strain to hear, she said, “Adam, the guy I was ‘mackin’ on’…he was a client.”

The look on Adam’s face changed from concern to shock. “What?”

She nodded, forcing herself to look him in the eye, her mouth screwed up to one corner. “Yeah. I slept with a client last night.”

Adam didn’t say anything at first, letting the information sink in. Then he shook his head. Adam usually had an explosive temper, something that few people other than Samantha knew was mostly an act…for juries, judges, courtroom audiences, assistant DAs or opposing attorneys…he knew how to play their intimidation to his favor, and it had always worked. But when Adam’s real emotions were involved, he was quiet…he stewed. He wouldn’t say anything for a time, and, when he finally did, his voice would be low and baritone. And Samantha could see and feel it right now. His disappointment and anger were palpable. She would have preferred it if he’d started yelling at her. But he didn’t. He finally lowered his voice when he said, “Samantha, what the f*ck were you thinking?”

She drew in a deep breath, shaking her head. “I wasn’t.”

“Obviously not.” He stood up, looking disgusted, and walked over to her window, looking out over the parking lot. He ran his fingers through his dark hair and turned around to face her. “You know you could lose your license over this.”

“I know. Don’t you think I’ve been thinking about that all morning?”

He grunted. “I hope it was worth it.”

It was, she thought. But was it really? “What should I do, Adam?”

“Hell if I know. You know better than to do that in the first place, Samantha.” He sighed. “Jesus.”

“Adam, don’t you think I’ve already thought about this? I know what I did was wrong…I just don’t know how to fix it.”