Jennifer L. Allen writes rock star romance—and that’s how we met! You’ll learn more about that when you read my interview with her below.

Jennifer, thank you for answering questions for me today. I first met you in my group, Jade’s Bullet Babes, and you have become an amazing friend. Please tell us how long you’ve been writing (both published and unpublished).

I started writing on a whim at the end of 2014. I had a dream and I couldn’t get it out of my head. I’m an avid reader, and all I kept thinking was that this would make a great book! I never thought I could do it…ever…but I finally typed it all out, deleted it, typed it, deleted it…you get the idea. And voila! Our Moon was born. It was published on June 2, 2015. I then published my second book, Change of Heart, in November and my third, Hearts in the Sand, the second in the series with Our Moon, will be out on April 8, 2016. But I guess my writing days go back to grade school when I had to complete random assignments for English and Language Arts classes. I bet if I dig far enough, I’ll be able to find my actual first book, which I think was about some fairy in the forest that I wrote in middle school! I always enjoyed expressing myself creatively like that.

There are actually further niches in rock star romance. I haven’t yet had a chance to read yours—but I will! Do you write sweet rock star romance? Gritty? Realistic? Tell me what makes yours stand out from the crowd.

Our Moon is definitely on the Young Adult side. The female main character’s age ranges from about 16/17 to 21 throughout the course of the book. So it’s absolutely a sweet rock star romance. Hearts in the Sand, which is part two in the JACT series, is more on the sexy side because the characters in it are older and more mature. I think what makes my books a little different is that they are sweet and not too gritty; there’s an innocence about them. Well, that’s the case with the JACT series, some of the other ideas I’ve got going on will not be so innocent.

Have you written in other genres or do you plan to? Please tell me about them. 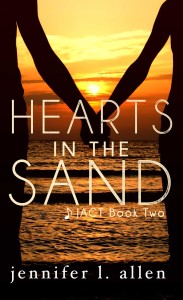 I set it aside. I think the great thing about being an indie author is that you make (most of) your own rules. I will occasionally set a deadline for myself if I’ve got a lot going on and need to budget my time, but for the most part, if I get stuck, I can put it in the corner and move on to something else because I don’t have to answer to anyone but myself. I got stumped when I wrote Hearts in the Sand but I knew how I wanted it to end, so I went and wrote the last ten chapters. Then, later on, I went back and filled in the middle. Immediately after I finished Our Moon, I started writing a story on one of the other characters from the book, Joey. I got stumped after 10,000 words, so I set it aside and wrote Change of Heart. I kind of just go with the flow. I want writing to stay fun for me and I feel like if I force something that just isn’t speaking to me, it’s going to make it less fun and it may result in producing a crap book that I wouldn’t want to share with readers.

Any of your characters you love more than any others? Hate? Any of them “speak” to you more loudly?

The only character I can think of that I seem to “hear” the most from is Alex from the JACT series. He’s the easygoing, classic best friend character. He’s just a fun loving, goofy guy and sometimes I feel like he’s picking on me to tell his story already, but I’m just not there yet. I’m getting closer, but the pieces haven’t all fallen into place yet.

There are little bits of me scattered throughout my books. A lot of the places my characters live in and go to are places I’ve been, like San Francisco, the Outer Banks, and Fort Worth (which you’ll see in Joey’s book if I ever finish it). Things that they do in those locations are mostly things that I’ve done, too. Most, if not all, of the musical references in the books are songs and bands I like. Some of the attitudes of the female characters are most likely me. Haha.

I hear that! If we had to read one book of yours, which one would you recommend and why?

Right now, I’d recommend Our Moon because it’s the start of a pretty fun journey with the JACT crew. Each book in that series will focus on the romance of one of the band members. Our Moon is about Ally and Chase; Hearts in the Sand is about Trevor and Sara; book/novella three will be about Joey and his wife, Evie; and book four will be about Alex and whatever trouble he gets himself into. Most of the readers I hear from love the crew and want to know more about them after reading Our Moon. In fact, Our Moon was supposed to be a standalone, but readers asked for more from the other guys, so the JACT series was born. I had no intention of writing a series, but it happened.

Tell me about something exciting or weird that’s happened to you since becoming an author.

The most exciting/weird/surreal thing is talking to authors! People like you, Jade! I started avidly reading romance in February 2013, and I read Bullet in September 2013. The fact that I’m even communicating with you to do this interview right now is surreal. You’re a celebrity to me. It’s the same with some of the other authors I socialize with…I’m like, holy crap! You wrote a book and I read it and I liked it and now I’m talking to you! I don’t think I’ll ever fully tame the inner fangirl, but it’s getting better.

I’m smiling right now. I think that’s what’s coolest about the internet—that we can interact with people we might not have been able to before, and I’m so glad we met! So…what else do we need to know about you and/or your books?

I love to hear from readers—I really do. Whether it’s a comment on my Facebook page, a message, an email, or a review…I just love to hear from readers. I got a message on Facebook the other day from someone who has an ARC of Hearts in the Sand and she was raving about it and it just made my entire day. A while back I got a message from a beta reader for the same book that said “damn you,” and that made my day, too. I love interacting with people. I absolutely love to read, too, so I love talking books, and not just my own. I seriously read several books a week. And regarding my books…they’re available on Kindle, through Kindle Unlimited, and on paperback. I’d love it if you took a chance on a new author! 🙂

Jennifer L. Allen is a wife, fur-mom, sister, daughter, aunt, friend, student, writer, and office manager who loves music, reading, traveling, and taking pictures – ideally all at once. 😉 You can find her online in these places—and, remember, she’d love to hear from you!