J.S. Snow and I have been Facebook friends for a couple of years now. When you’re an indie romance author, you tend to make a lot of friends! Turns out J.S. and I have a lot in common. Grab a cup of coffee and read what she had to say! 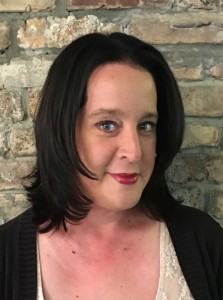 J.S. Snow began her literary obsession at the tender age of eleven with the first voluntarily read book Are You There God? It’s Me, Margaret by Judy Blume. Only a few years later her fascination with fictional offerings really took root as she stepped into the mind of one of her heroes Stephen King through his work Christine.

Now seriously considering a twelve-step program for her e-Reader addiction, she feeds her fascination for make believe with new literary offerings via said e-Reader, has a passion for dark chocolate, sweet tea and heavy metal music. She is the proud mother of a downright spectacular daughter (who was head banging in the belly) and lives with the belief that the mind where the imagination lives is a far more entertaining place than TV or movies ever will be.

J.S. Snow currently resides in Central Florida and has been in the administrative office field for thirty years.

JS, thank you for answering questions for me today. You and I are in the same Facebook circles, and that’s how we met. Please tell us how long you’ve been publishing.

I published my first work Redemption in December 2013 and at this time I am currently indie; however, there is a publisher who is showing interest in the series.

Redemption is part of a series called The Metal Prodigy Series and as of today, there are three full-length novels and two novellas published. I am currently working on the fourth full-length novel in the series and sixth book overall – Temptation. As far as what inspired me to write in this subgenre, there really wasn’t a particular reason other than Alex’s story has been in my head for over twenty years. My love of music is what fuels my creativity. I wasn’t even aware at the time I was writing Redemption that there actually was this subgenre. It wasn’t until I was posting Redemption for sale on Amazon that I saw we rockers have a category all our own. 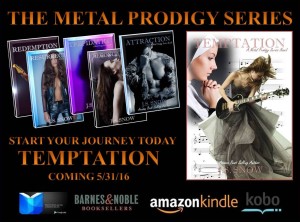 There are actually further niches in rock star romance. I haven’t yet had a chance to read yours. Do you write sweet rock star romance? Gritty? Realistic? Tell me what makes yours stand out from the crowd.

I would have to answer realistic but with a suspenseful twist. Alex’s story isn’t your typical girl meets a guy kind of romance. All of the characters in play throughout this series are living in a “six degrees of separation” world and they somehow relate back to the beginning of Alex’s life. The band – Hells Redemption – is the catalyst for how she is living her life now and the choices she faced to make. I think what sets my stories apart from the others I’ve read in our genre is my writing style. While I’m not the only narrative writer out there, I keep in mind that I want to bring the reader in as if they are really watching this story unfold before them and involve them in these characters’ lives.

Do you have a bestselling or “breakout” book you’d like to tell me about?

I think that would have to be this series flagship novel, the first one, Redemption. I’ve truly been blessed by the feedback I’ve gotten from it. It’s not easy for a debut author to garner such high star ratings, despite the fact it’s a hot editorial mess. Readers have been willing to overlook what I didn’t know as far as “writing rules” are concerned and gave the story a chance. This leads them to the others where my writing definitely improved. They’ve all said that these characters are what brings them back. I’ve also been honored to learn many of them are binge reading the entire series in a span of days and suffering from “book hangovers.” It’s been the highest compliment of my career thus far.

Have you written in other genres or do you plan to? Please tell me about them.

It’s appearing to me as though I have given birth to an entire world in which I can span out into an entirely new universe. Offshoots of this core series have been outlined. As far as veering away from this genre, I have in the back of my head a few erotica series and one paranormal vampire series I’d like to write.

I’m meticulous about outlining. When writing a series where you have several characters you are writing about, it’s essential. I never really hit a wall because I have too much story to cover. If one character isn’t cooperating, then I move onto the next. My books are rather long due to this fact, but it all weaves together and works.

The only thing I require is peace and quiet. I can’t have background noise or even music going to focus. I work full time and that’s easier said than done at times. I write at lunchtime in my car in an empty parking lot, when I come home along with another writer who requires the same and very early in the morning when I wake and the world is still asleep.

Any of your characters, you love more than any others? Hate? Any of them “speak” to you more loudly?

I have six incredibly boisterous musicians who work as a team running around my head causing trouble all the time. They love screwing with me. When one particular character enters my head and wishes to talk with me, it’s generally because I’m chewing on a path in the story that I’m unsure will work or not. Next thing I know, I enter the world of crazy, have a full on conversation with them as if they really exist and then the reader sees it in the book. You’ll forgive me as I pause to look over my shoulder to see if the folks from the funny farm have shown up with a straitjacket with my name on it.

Wow, talk about your segues. Thank you for this opportunity. In the back of my novella Trepidation is an interview where my fictional band Hells Redemption interviews me, their creator. [What a cool idea!] I wrote it at the time to work out a few things in my own noggin and to maybe give my readers a bit more insight into how I tick. My conversation with the rhythm guitarist of the group sums it up nicely I think:

“Fuck you, no you weren’t. Of all my characters, you have the heaviest and most difficult of burdens to bear. Not even Alex. What she went through… she has no memory of what she went through as a small child. If and when it comes out, it’s still in the past, you have to deal with the effects and consequences of my burden I deal with every day, and it will never be in the past. I chose you because of all these characters; you are the one who can deal with it head on.

“Seth represents my leadership, and my peacemaker instincts I’ve possessed since I was born. I’m the oldest of eight children for crying out loud; it comes naturally to me. I’d rather see people be real with each other, and settle things in a civilized manner, just like him. However, Seth and I share the same guilt over a past decision, and we live daily with the shame. There wouldn’t be any way he could shoulder this shit too.

“Hiatt represents my insecurity. I figure if I can at least make people laugh; they won’t forget about me. I won’t disappear in the crowd like I always do. Hiatt and I also share the need to do our own thing and be left the hell alone, which comes across to many as selfish. Therefore, he can’t absorb this burden.

“John represents the persona I let everyone see, but it’s not who I really am. I fear if people truly know who I am, they won’t like me. So like John, I tend to be quiet and reserved when everyone else is enjoying the party. Someone who doesn’t speak and doesn’t have the courage to be who they really are can’t handle this burden.

“Cole represents my inability to focus at times. Can you imagine what a powerhouse his character would be in the music industry if he simply put forth the effort and focused? I haven’t seen the majority of my goals I have set in my life to one hundred percent because I give up too easily. No way can Cole handle this burden. You can’t leave something like this unfinished.

“Believe me Drake, after reading this story, you’ll totally understand my reasons for not telling you why Alex can’t handle this shit, she’s got enough fucking problems. So that leaves you.”

While I am mortified at the thought, considering I am such a huge fan of yours and also for the fact I haven’t finished cleaning up Redemption yet for re-release to clean up the grammatical and formatting mess that it is, it would be that one. If you’ll excuse me now, I’m going to go and throw up.

Oh, now you have me blushing. Thank you so much! I hope I can read it soon. Let me know when you’re ready! Now…please tell me about something exciting or weird that’s happened to you since becoming an author.

I’m a reader and a fan just like anyone else. So when one of the authors I read actually follows me back on Facebook or Twitter, it’s pretty epic in my universe. When one comments back on a post, I turn into a gushing fan girl. It’s embarrassing really.

What else do we need to know about you and/or your books?

I’m in this for life. I’m blessed to be at a point where I can do this and churn out books frequently. I’m not going anywhere.

J.S. Snow is working hard on finishing her fourth full-length novel in the acclaimed five-star Metal Prodigy Series, Temptation, due out May 31, 2016. In the meantime, if you haven’t already checked her out, she invites you to hop on board her own crazy train at her Facebook page https://www.facebook.com/jbstspbooks.