Nicky Wells and I met a couple of years ago through Facebook. We both had rock star books coming out the same week, and she suggested we party like rock stars together to celebrate and announce the event…so we did! I discovered then that Nicky is a delightful breath of fresh air, and we’ve been friends ever since. Recently, Nicky took a few moments to be interviewed, and this is what she had to say!

Nicky, thank you for answering questions for me today. Let’s get right to it! Please tell us how long you’ve been publishing. 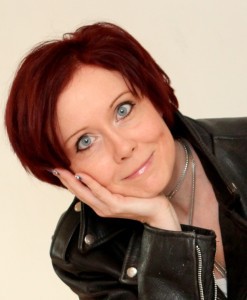 Hey, Jade, thank you for inviting me. It’s a pleasure to visit you! I’ve been publishing since July 2011, so that would make it just under five years. I started out self-publishing and then was fortunate to sign with Sapphire Star Publishing, who took on my first three rock star books. After that, I self-published three more, and my seventh book, also self-published initially, has just been picked up by Choc Lit, who will republish it sometime this summer.

All my books to date are rock star books. The Sophie trilogy is the story of “girl next door somehow after half a lifetime makes good with famous rock star” and it is my personal favourite Cinderella story of all time. Make no mistakes–there’s plenty of drama and many a twist and turn along the way, though… Fallen for Rock is a bit more on the spicy side and features a heroine who actually hates rock and “falls” for it in a strange and roundabout way. My two Christmas novellas feature rock star in-the-making Jude and his girlfriend Carrie. And 7 Years Bad Sex charts the romantic misadventures of rock star couple Casey and Alex.

What inspired me, you ask? Okay, I have a confession to make. I have a deep and lasting love for a variety of rock stars. Some might say it’s a hangover from my teenage years, but it goes deeper than that. There’s just something about a man with a powerful voice and a strong guitar (or should that be the other way round? Or both?) that “does it” for me. Even today. Apparently I’m a menace and a liability at a rock concert because I’ll still work my way backstage somehow given half a chance. Just for a chat, you understand. I am happily married with two kids!!

There are actually further niches in rock star romance. I haven’t yet had a chance to read yours, but I have read a lot of snippets and teasers. It seems that you write rock star romance with a heavy dash of humor. Is that correct? What else do we need to know about your rock star romances? Tell us what makes yours stand out from the crowd.

I’d like to think they’re humorous; but then I’m German, so what do I know about humour? #JustKidding! Although I do find people don’t expect me to have a sense of humour and certainly not in my second language. Ha! Anyway, I digress. Sophie can be a little bit ditzy (in manner reminiscent of, perhaps, Bridget Jones), and she has quite a few comedy moments foisted upon her, some of her own making, some arising by pure misfortune. 7 Years Bad Sex, my latest book, definitely is full of comedy moments. Humour is the way forward when your relationship doesn’t perform as expected.

I think on the whole, and with the exception of Fallen for Rock, my rock star books are probably slightly different from the vast variety in the genre in that they are fairly innocent. Innocent, you say? I know: “How does that work with a rock star? Isn’t that against the very cliché of the rock and roll scene?”

You might say so. And I am certainly aware of what has been known to occur when rock stars, girls, and too much booze get into one room. But the bands I’ve met–they’re different. They’re normal people (who occasionally drink too much, I’ll grant you that) who are slave to their music in the same way that I am slave to my writing. Music is their life and their job, but they also have families, relationships, houses, mortgages, and normal lives. So I guess I wanted to portray the more “normal” side of rock, the less outrageous side. Oh, the glamour, the extravagance, the heady “what goes on tour” are all present and correct… but in my own unique way. My books aren’t Fifty Shades; they’re romance set in a rock environment.

Do you have a bestselling or “breakout” book you’d like to tell me about?

Can I plug two? Yes? Cool. The first book I’d like to mention is Sophie’s Turn. This is the book that really got me writing. It emerged from the depths of my soul, having germinated for a good many years, when I was pregnant with my first child. I had quit my job (long story) and I promised myself that I’d Write That Book before the arrival of Wells Baby Number 1. So in fact, this is my first Book Baby, and it holds a special place on my shelf. It’s my debut, my breakout, and (quite possibly) one of my proudest moments. I actually cried when it turned up on Amazon and my, when I held the first hard copy in my hands, I cried some more.

The other book I’d like to tell you about is the previously mentioned 7 Years Bad Sex. This is possibly my most daring book yet. The premise is intriguing: what happens to a young married couple who can’t have sex? What happens to their relationship? How do they cope? It’s humorous and lighthearted, but it’s not all about the sex. It’s asking, somewhere deep down, some hard questions. How important is the physical side of a romance? How strong is the bond of love when you and your partner are really struggling? How far can you stretch it before it breaks? I hasten to add that this is pure fiction, although some people really believe in the curse. But it’s certainly not based on real experiences! 7 Years Bad Sex has been doing really well for me so far. It spent three months in the top 20 of Amazon Kindle UK’s “Love, Sex and Marriage” charts, where it sunned itself in some really astounding company. I’m ever so proud of this achievement. I’ve also signed it with UK publisher Choc Lit, and it’s due for re-release later this year. Watch this space!

Awesome! Have you written in other genres or do you plan to? Please tell me about them.

I have, and I am! I have just written a crime thriller. With a nod to my niche, it features the daughter of a rock star couple who ends up investigating the circumstances of the tragic death of her parents. There is a romance subplot, but the crime element takes the front seat. It was an exhilarating experience to cut my teeth in a completely different genre, and I hope to bring you this book by the end of the year.

My next book is also a thriller, this one more of a cyberspace nature. I’m not sure whether there’ll be any rock star acknowledgement in this one; maybe I’ll build in a cameo, or maybe I’ll go cold turkey on something completely different. I think I’ll decide based on the response to my first thriller. And after that, I may possibly write the sequel to 7 Years Bad Sex. 🙂

I don’t. I don’t want to annoy anyone here or show off, but I simply don’t get writer’s block. If anything, I have too much, too fast, in my head. I was a professional writer in a business environment for some six years, and it was a case of learning to produce on demand. So I did, and I have never been blocked since. I just … write. I am also an obsessive compulsive planner, so that probably helps. I know exactly where I’m going before I even write the opening paragraph.

I tidy my desk. It has to be just so. Seriously! I’m totally OCD on that front, but if my writing space isn’t clear or the house is untidy, I can’t write. I discovered this also in my previous professional life, and a manager once told me that tidying seems to be my “peak performance ritual,” a sequence of steps I go through to get “in the zone.” So be it! At least my house is always tidy, LOL.

Nice! Any of your characters you love more than any others? Hate? Any of them “speak” to you more loudly?

Dan. Man, if I could make Dan of the Sophie trilogy a real person, the world would be a better place. I’m not sure my hubs would be overly impressed, though!

Too much! My characters are frightfully me, although they all show slightly different sides. Of all the characters, Sophie is probably the closest to me because we share the same blue eyes, literally and metaphorically.

If you wanted a taster to get you in the mood for more, you mean? I’d have to say Fairy Tale in New York. It’s got everything: rock, romance, Christmas, snow, disaster, friendship, small miracles, a wedding… It’s a great book, and it’s a novella, so it’s a quick (but intensely satisfying) read.

What is a weird or exciting thing that’s happened to you since you became an author?

Good question. In many a small way, my life is littered with weird and wonderful occurrences, but they’re probably weird and wonderful to me. However, I’d have to say that interviewing UK rock band The Darkness for Siren FM was certainly an event I’m not forgetting in a hurry. You can listen to it here, if you want: http://www.sirenonline.co.uk/archives/4910

Nicky Wells is a true-blue rock chick, author, mother, wife and occasional domestic goddess. Visit Nicky at nickywells.com or follow Nicky on Facebook or Twitter. All of Nicky’s books are available on Amazon.