Silver Dagger Scriptorium is running a fun book tour for me–for the entire Bullet series! Follow the links and enter the Rafflecopter…and be sure to say hi to a blog or two!  🙂 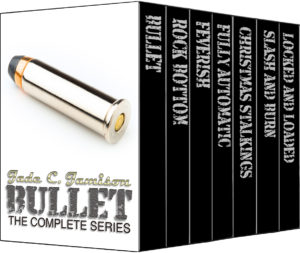 Find out why readers have dubbed Jade C. Jamison the “Queen of Rock Romance” with the complete Bullet series, described as “gritty,” “raw,” and “real.” Realistic rock stars, real angst and heartache in this true-to-life glimpse of sex, drugs, and rock and roll.

She tasted a little bit of heaven with him, and now they’ve gone through hell and back, but can their relationship take anymore?

Valerie Quinn is a naïve college freshman when she meets on-the-rise rock star Ethan Richards. He’s an idealistic, handsome, reckless young man, but he’s captured her heart. She doesn’t give up on him and eventually his walls crumble down. By the time Valerie has given herself to him completely, she discovers he’s damaged and may be beyond help. Can she save Ethan and their relationship before he implodes, or will he self-destruct and take her with him?

Yes, this is the book you’ve been hearing all the buzz about!

The book is free at all sites.

The much-anticipated sequel to Bullet.

Rock star Ethan Richards has fought depression and a host of other demons all his adult life, and it’s caused him to lose everything—his wife, his son, his friends, and he almost loses the one thing that means the most to him—his band. He hits rock bottom and believes there is no way out.

Enter Jenna McCormick, a feisty drug and alcohol counselor, a woman with her own share of troubles. She finds Ethan intriguing but keeps him at a distance while trying to help him face life without crutches. She feels a spark but denies it, knowing that a relationship with unstable Ethan could be dangerous for both of them.

Ethan knows what he wants, though, and isn’t used to being told no. Jenna isn’t willing to risk Ethan losing his tenuous grip on sobriety, however, and is prepared to deny her deeper feelings to help Ethan climb out of his hole, but he learns how to let go of his pain when he finds that someone is prepared to walk with him through the shadows. Can he convince Jenna that they should take a chance on love or will they forever deny their feelings in an effort to keep Ethan on the straight and narrow?

…To be loved by the good guy

He’ll make you FEVERISH either way…

Clayton “Jet” Smith has enjoyed acting the part of rock star god / incorrigible bad boy since his breakup with rock goddess Valerie Quinn. He’s racking up quite a score playing the field, and he has no plans to settle down anytime soon. His biggest problem these days is meeting his obligations. He’s so busy having fun, he forgets the important things.

To help him out, he hires recent graduate Emily Brinkman to be his personal assistant, and he quickly finds a fire burning in his belly for her. There are two problems, however. The first is that Emily is engaged to be married, a fact that leaves Jet unfazed. The second problem isn’t so easy to surmount, though: Emily is disgusted and unimpressed by both sides of the man.

Will Clay find a way to persuade Emily to try him out, not just for one night, but for all time?

Feverish moves the Bullet story forward, but the book can be read as a stand alone title. You don’t want to miss this one!

Valerie might have thought she and Brad were inevitable and maybe, in the back of his mind, Brad might have felt that way too, but he didn’t just sit around waiting for her. See the secret side of Brad that you had no idea existed. What kept the driving force behind Fully Automatic focused even while his heart was breaking?

This story can be read as a standalone. 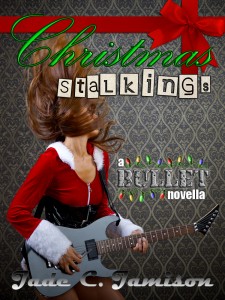 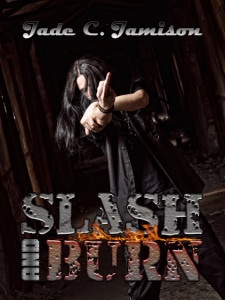 Is theirs a match made in heaven…or hell?

Nick Channing, drummer for Fully Automatic, has never taken relationships seriously. He’s had fun and met dozens of women—mostly one-night stands—and he prefers it that way. From his parents to his friends, he’s witnessed love and relationships firsthand and believes women are nothing but a headache.

Nick, Brad, and Val team up again to launch her new band Val Hella. There’s one problem, though: they still need a bassist. They audition dozens of women, trying to find the perfect one and settle on Sabrina, known onstage simply as Sinna, a bad ass metal head who’s perfect for the band: pierced, tattooed, dressed in black from head to toe, and she handles her bass with precision. She is a force to be reckoned with and Nick is smitten.

When Nick gets her alone the first time to lay on the charm, he’s met with a coolness he’s never experienced. Sabrina is mysterious and thoroughly unimpressed with Nick and his behavior, and that’s when he decides he has to have her. As he falls headlong for her, he discovers her secrets, one dark shadow at a time. He thinks she loves him back, but he can’t be sure. By the time he’s completely down the rabbit hole, his heart’s so entangled, he fears he might not be able to save himself. Can she save him or will she wreck him for all time?

Zane Carson is an idealistic young man with one big skeleton in his closet when he first meets Jennifer Manders in college. They date only to break up soon after. The sexual attraction is like an electromagnet but they fight like alley cats. The relationship just isn’t worth it.

Zane’s band Fully Automatic breaks big about the same time Jennifer finishes college. One summer afternoon, they meet for coffee and sparks fly once more. It’s off again, on again, but they just can’t make it work and break it off for good, deciding it’s not worth the effort.

But Zane is drawn to her and, during a break in the music action, he tracks her down again, willing to change himself for her and needing to give her one last try. The attraction is as strong as ever, but now Jennifer is hiding something from Zane—something big, something that threatens to extinguish the spark for good. When Zane discovers her secret, will he be able to forgive her or will that be the end?

And visit these awesome blogs!

March 9- Ya Gotta Read This

March 13- Romance That’s ‘Out of this World’