For the A-to-Z April Blogging Challenge, I’m writing a story, aiming for 1000 words a day (every day except Sundays). Continuing today with part 10 of a story about the character Codie Snow.

If you’re new to this series of posts, you might want to start here:

NOTE:  One thing that’s been a little weird about this challenge is the way I’m writing.  I usually write a chapter at a time, sensing where those breaks should go, and so there are always scenes but each one has its own mini story, complete with tension and building conflict as we work our way toward the end.  For this challenge, I’m just writing the story without chapters in mind at all.  I sometimes “see” where one might go, but it’s not part of the process right now.  That will make revision interesting.  🙂

The volume of the music blaring from the house dropped, but that didn’t stop the hairs from standing up straight on Codie’s forearms. She knew down deep in her bones that something was wrong—dead wrong.

“Codie,” Pete said, without turning his head to look back, “I need you to get back in the car, and I want you to duck low, out of sight.

“Do it,” he said, his voice low but scary, letting her know there would be no arguing. He tilted his head and spoke into the mike attached to his shoulder. Codie thought he was calling for backup, but she couldn’t be sure.

She started to walk backwards, really not sure if that car would keep her safe, but she knew it was more the idea of out of sight, out of mind. If the bad guys couldn’t see her, she might not be a target.

Before she could move any farther, though, the door from the house into the garage banged open and smoke trailed behind the man in a big cloudy puff. “Hands up where I can see them.” It was an order, and it wasn’t quiet. Pete had suddenly turned formidable—and scary.

“Now!” Codie was frozen, just watching the action. The guy dropped his cigarette on the concrete floor of the garage and held his arms out—probably not the way Pete had wanted him to, but it was definitely easy to see that he wasn’t holding anything. With lightning speed, Pete had the guy cuffed and was patting him down, asking him questions. Codie couldn’t hear a lot of what was said, but the guy answered one question loudly enough that Pete understood.

Pete marched the guy out of the garage and didn’t even look Codie in the eye as they passed her and he opened the back door to the cruiser, practically stuffing the guy inside. “I’ll find her.” Once he closed the door, he said to Codie, “I’d remind you to get in the car, but I’m sure he reeks of toxic shit. Just stay close to the car, got it?” She nodded and watched him walk back through the garage, this time with his gun in his hands. 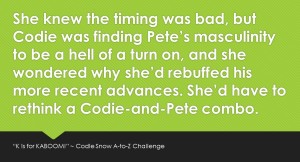 She knew the timing was bad, but Codie was finding Pete’s masculinity to be a hell of a turn on, and she wondered why she’d rebuffed his more recent advances. She’d have to rethink a Codie-and-Pete combo.

As Pete made his way through the garage again, she could hear the guy making noise in the cruiser—shouting, maybe? And then it sounded like he was banging on the window, but his hands were cuffed, so she didn’t know how he could do that. She turned around to glance and saw him banging his head on the glass, and when she looked, he started shouting at her. He looked panicked, but there wasn’t anything she could do, no matter what the guy was saying. She shook her head at him and turned back around just in time to see a woman with blonde hair sticking up all over run out the front door. She had a pitcher in her hands, holding it like a weapon, and she looked around frantically. It was dark and the cop car wasn’t flashing the red-and-blues, but she spied it anyway and ran over. Codie felt her eyes grow wide but she just stared, feeling like she couldn’t move.

“Brian? You in there?” When she saw Codie, she acted at first like she was going to tackle the woman, and Codie braced herself for it, preparing for a fight, but then the woman suddenly flung her arm so that the pitcher’s contents doused Codie in a cold liquid that didn’t seem to have any smell.

But it was cold and it made her gasp while throwing her off guard. Before she could fully get her wits about her, she heard the woman yell, “I’ll get you out, Brian!” And the woman started running down the street before Codie could even make sense of any of it. She ran to the edge of the driveway, wondering if it would be smart or safe even to chase the woman, and she was grappling with what to do when she heard an explosion from the house behind her.

She spun on her feet to see the flickering of flames off smoke coming from in back of the house, and she could hear several dogs barking and howling in the neighborhood. It was then that she heard several sirens in the far off distance, Pete’s backup whose timing left a lot to be desired.

Codie decided she couldn’t chase the woman—not with all that was happening. Now she had to wonder what had happened to Pete. Was he injured? Dead? Had he caused the explosion or just been unfortunate enough to be there when it happened?

Should she go inside and try to save him?

Another smaller explosion told her she shouldn’t. But she wanted to know what the hell was taking his backup so damn long and decided she couldn’t just stand there while Pete might be dying or dead…